We are a family of 4 with 2 adults and 2 children who are aged 7 and 6. We stayed at Disneyland Paris for 3 nights and 4 days at the Dream Castle Hotel. This let us spend 2 days at the parks with park hopper tickets on both days. Here is our family’s Disneyland Paris Trip report for July 2022! 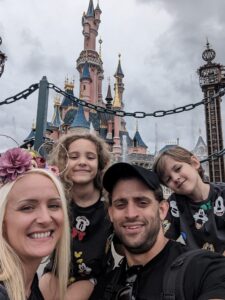 We flew from Birmingham to Orly with Vueling airlines. The flight out was fine. Birmingham wasn’t too busy, we got there 3 hours before our flight time and had to queue quite a bit for the security checks but the line moved quickly. We opted for a private transfer as it was actually cheaper than getting a shuttle bus and I’m glad we did. The guy who picked us up was ready and waiting for us, very polite and friendly, opened the car doors for us and helped me with my suitcase.

The Dream Castle Hotel was ok, there were renovations taking place but to be honest it really didn’t impact us at all. Dream Castle hotel was very clean and the entrance hall is lovely. Work was being done on the centre piece as you walk in during the length of our stay, but again, this wasn’t an issue. The room was a little smaller than I expected but was adequate for our needs. Be careful of the bunk beds as the top one is a little high up for young children and my daughter actually fell off the ladder trying to get down and badly bruised her leg and chest. We actually all ended up sleeping in the big bed together. There was a hairdryer, fridge and safe in the room. Hairdryer worked fine and so did the safe, however the fridge didn’t work. I mentioned this to the staff and they said they would come and sort it but never did. Coffee, tea, sugar, milk and cups were also in the room, we asked for more and they gave them to us free of charge. 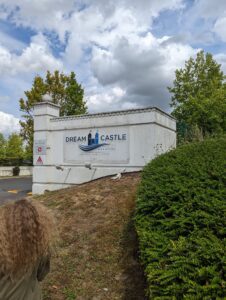 We opted for half board which is breakfast and dinner. I would rate it as ok. There wasn’t much for the kiddies to be honest, they only had chips 1 of the nights and they had herbs on them so my daughter didn’t like them. My son loves meat so he was absolutely fine lol! It was busy each time we went into the restaurant and people could be quite rude but I expected this.
The pool was indoors with a slide, 2 pools and a hot tub type thing (over 18s only) The pool was unsupervised and there were approximately 10 sun loungers, again it was ok. Changing rooms had 2 private cubicles the rest was an open space, which wasn’t an issue as it was quiet. To use lockers you have to make up your own pin number in order to lock them. You can request towels at reception. The staff were all very friendly and helpful. 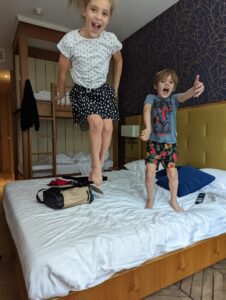 The hotel was expensive to buy drinks and food. We ordered 3 tequila shots and a small rose wine and it came to 31 euros. It was an 18 minute walk to the Supermarche Casino where we bought food, but to be honest it was still quite expensive there too! We made up some sandwiches and bought crisps to take to the park which worked well for us. Beside the Supermarket there was also a vape shop and a pharmacy.

We got to the park around 10am and queues weren’t too bad to get in, bearable. We stayed all day in Disneyland Park the 1st day and got on 6 rides. The weather was warm but overcast and I’m glad as it made it a lot more bearable walking around all day. We decided not to go on any rides that had over a 45 min wait as we didn’t want to waste our time queuing. It was magical and I cried when first entering! 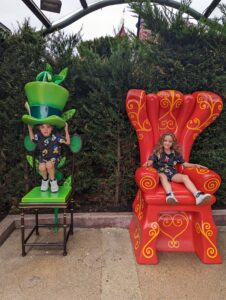 For me the classic rides were awesome : Phantom Manor, Star Tours and Pirates of the Caribbean. It really took me back to when I last went 29 years ago! The Dragon under the castle is fabulous and you can just walk straight in. We bought ice creams and lollies that were expensive but it’s what I was expecting so i didn’t mind. My son and I bought a twister lolly and ended up getting our lips stuck to it for about 5 minutes. It literally ripped the skin off of our lips and they were bleeding so be wary!! The Mickey Ice Cream was a much better experience! 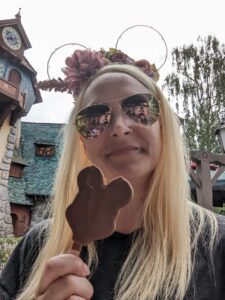 Merchandise also wasn’t as bad as I thought it would be price wise. All in all we spent about £800 and £200 of that was the kids money that they had saved for the trip. We left at around 5pm with the intention to return for the fireworks, however, we were all way too tired to make it back. In hindsight I would have picked different flights as we had to wake at 3am to be ready for our 8am flight which made us very tired on our first day.

We were so tired from the day before so we decided to have a lie in. We had breakfast and got to the park around 12pm with the intention to see the day all the way through to the fireworks and I’m happy to say we made it this time! We headed straight to Walt Disney Studios. Once again it was an amazing day. Our fun started with the Twilight Zone Tower of Terror (my favourite!) which had a short queue so was it was ideal. My partner managed to lose his hat! We managed 7 rides on the 2nd day. 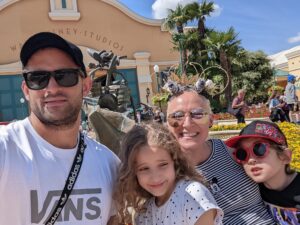 Our last ride of the day was Ratatouille and we waited until 8:45pm to go on it as the queue finally went down to 35 mins. We didn’t need to queue to get in to avengers campus. It was busy and there isn’t a lot in there to be honest. We couldn’t go on Avengers Assemble Flight Force as my son didn’t meet the height requirements unfortunately. The queue time for this ride was only 35 mins during the day. We didn’t manage to try the Spiderman : Web Slinger ride as the queue was consistently between 70 – 90 minutes wait. What was really good about Avengers Campus was that there were lots of characters and meet & greets. Spiderman regularly popped up on the rooftops which was awesome. We saw Doctor Strange, Spiderman, Black Panther, Black widow and Captain Marvel.

We had a reservation at PYM restaurant which we had booked in advance. We turned up early and it’s a good job we did as we had to queue even though we had a reservation. They only hold your table for 15 minutes beyond your reservation time. The restaurant was underwhelming in my opinion and quite plain with not a lot of décor. The food, to be honest, wasn’t great and the table service was poor. It took a long time for someone to realise our drink order hadn’t been taken. For the €144 we paid you would expect something special and it really wasn’t. I would not recommend going there. 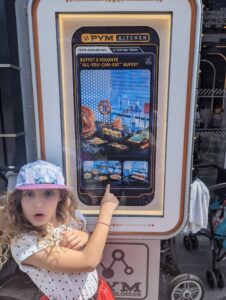 We headed back to Disneyland Park to go on the rides we didn’t manage to do on the previous day and we managed to get a kerb side space to watch the 5:30 parade. It was hot! I had stocked up on water and took fans and cooling towels which worked a treat! Water fountains all worked throughout the park and we topped up our bottles regularly. We then headed back to Walt Disney Studios to do Ratatouille again. I tried continuously throughout the day to get in the virtual queue for Marvel Superhero training but unfortunately I was not successful. After doing Ratatouille we headed back to the main park to find a spot for the fireworks. We found a spot in front of the grass near the central part in front of the castle. We had our backs against the fenced off grass. I would recommend finding a spot as early as possible, preferably with something behind you. It was crazy, so many people and very selfish, trampling over the kids and trying to get a spot. Everyone at one point was chanting “sit down!”. My kids joined in and my daughter ended up screaming it but it worked lol! The fireworks and D-Light show were incredible. 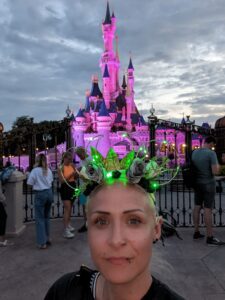 I would definitely recommend doing it (again I cried lol). We hung back a bit after to let all the people charge out, we did end up in a big crowd and my daughter was a bit scared. Before heading back to the hotel popped in to the World of Disney store at the front of Disney Village to buy some last minute souvenirs and to let the crowds die down a bit. We met a lovely French man who worked there but was off duty and he was buying something from the World of Disney. We started chatting and he offered to use his discount card and gave us a 20% discount which he didn’t need to do, but was so lovely of him!
After reading up on the DLPtips Facebook page about the shuttle buses after the fireworks, we opted to get a taxi back to the dream castle. I’m so glad we did this as we saw the shuttle buses were absolutely crammed full with people. I’d heard horror stories about kids getting trampled on and dad’s getting left behind. We paid €20 for the taxi and it was worth every penny as I didn’t want to put my, already scared, children through that. We only waited about 5 mins for a taxi. 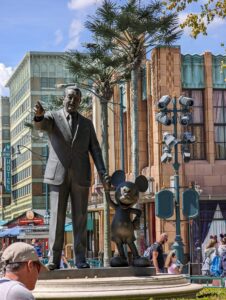 Travelling home – I asked reception if they would mind ringing the transfer company for me to see what time we would be picked up, which they did very kindly. Our flight was at 18:10 and we got picked up at 14:15. I checked the Vueling app when we were in the car on the way to the airport and it said the flight time had changed to 19:40 but when we went to check in it was saying the flight was on time! After check in we went through security and it was still saying on time at the airport but the app and Google were saying different. It wasn’t until it was time to board that the boards were updated to say we were delayed by 1hr 10 mins. Other than than the flight home was fine.