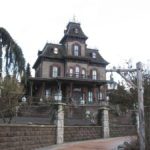 A sinister presence fills the hallways of this once beautiful mansion. Phantom Manor is not for the faint hearted!

Many years ago, Ravenswood Manor was a beautiful, love-filled Manor house sitting atop the hill overlooking thunder Mesa below. This peace & tranquillity was not to last however and now the locals refer to it as simply “Phantom Manor” due to the ghostly goings on.

This dark family ride is suitable for all ages (it is Disney after all) but please be warned that little ones may find it a bit unnerving. There is a moment on the downward lift section where the room is plunged into total darkness & occasionally screams can be heard from inside the mansion and also inside the room!

This attraction is based on the Haunted Mansion ride at Walt Disney World but the story is unique to Disneyland Paris. Phantom Manor at DLP is also a much darker, some say spookier, experience. The whole area is based around the story of Big Thunder Mountain mines & the family which owned the lands, the Ravenwoods. The attraction is more than just a ride & is split into 4 distinct sections.

Henry Ravenswood (born in 1795) was a lucky settler who struck Gold & founded his own mining company, Thunder Mesa Mining Co. As his mining operation grew, so did the town of Thunder Mesa & the surrounding area (Frontierland). Henry Ravenswood became rich beyond his dreams & built himself a huge mansion on top of Boot Hill where he and his wife took residence. In 1842 his wife Martha gave birth to a child, Melanie Ravenswood.

Melanie grew up to be a beautiful woman & fell madly in love with a local engineer who worked on the mine trains in Big Thunder Mountain. Henry Ravenswood feared that Melanie’s new found love would see her leave Thunder Mesa to start a new life & he became incensed with rage and tried everything he could to stop the lovers being wed. It was around this time that a huge tragedy befell the town as an Earthquake hit Thunder Mesa. Henry & his wife Martha were tragically killed. You can read about the Indian curse which is said to have caused the earthquake on Big Thunder Mountain HERE.

Some weeks later, the wedding date arrived. While Melanie prepared for the ceremony, a mysterious Phantom lured her groom to the attic upon where he was hanged from the rafters by the neck. In the grand ballroom, Melanie sat alone, weeping, for hours as guests slowly left the manor one by one. Eventually there was just Melanie left & a handful of servants. She could not face the reality that the love of her life was never going to turn up & she never, ever, gave up hope of him joining her to complete the wedding ceremony.

Melanie never took off her wedding dress & held onto her bouquet as she wandered hopelessly through the many hallways & rooms of the mansion house…… searching for her love. After some time even the servants left the house & Melanie was completely alone……. well….. not completely alone as the Phantom continued to roam the Manor too, laughing manically as Melanie searched aimlessly for her lost love.

As the years passed by the Phantom began to fill the house with his dead demonic friends for an eternal party. The evil & darkness began to change the very structure of the house. Walls began to creak & even the pictures themselves became possessed with evil. Cobwebs grew everywhere & the house decayed with every passing year. Wandering the halls, Melanie would sing soft melancholy songs to her groom whilst all around the ghouls & ghosts revelled in their eternal party. Everywhere Melanie went she was reminded of her wedding day. 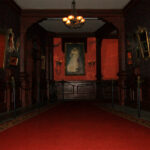 The Phantom continued to torment Melanie with laughter throughout the mansion as she fell into deeper and deeper misery. She never, ever gave up hope. No one ever set foot in the house again. We are not quite sure what became of Melanie but it is said that you can still, to this day, hear her melancholy songs pouring from the manor house. The evil laughter & sounds of partying guests can also be heard in Phantom Manor. Occasionally you can see a light flicker in the old house and shadows passing windows.

Many believe that Melanie still searches through the house & the Phantom continues to taunt her even in death as he did in life. Rumour has it that the Phantom was in fact her father Henry Ravenswood who is manically proud of himself for keeping his daughter with him for eternity and finally stopping the young innocent engineer from taking his beloved child away from him. Others say that it is the curse of the Indian Thunder Bird god which manifested as a phantom spirit and took revenge on the young girl & the entire town for consecrating the sacred Indian area.

Perhaps we will never know ? Are you brave enough to investigate Phantom Manor for yourself ?

Take your time in the queue area and after exiting as there is so much more to this attraction than the ride itself.

Riding at night is extra spooky !!

entering & exiting the buggies is via a moving walkway so please be careful, especially with younger children.

Look in the mirrors at the end of the ride & check your reflection. Is that something on top of your doom buggy ? Eeeeeek!!!