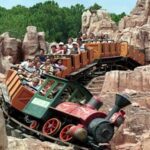 Wildest Ride in the Wilderness !

The track spans around 1500 metres & the trains will reach speeds of over 40mph lasting around 4 minutes. During the final tunnel however you will as though the train is hurtling at speeds of around 100mph in the darkness. It truly is a great experience! The Big Thunder Mountain island offers some stunning views of the park & beyond as you ride around. There are spectacular views of Phantom Manor, Sleeping Beauty’s Castle & in the far distance you will also see the Twilight Zone Tower of Terror in the Walt Disney Studios Park. 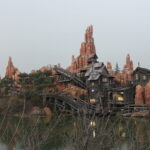 The Big Thunder Mountain railroad is situated in the town of Thunder Mesa. Thunder Mesa is an old 1800’s mining town which had the great fortune to strike Gold! Unfortunately the good fortune was not to last as it turned out that the mining town was built on a sacred area of the ancient Native Americans who then cursed the entire area. The curse caused an earthquake which left the mines unstable & the people of the local town & area abandoned the place. Years later passers by witnessed the old mine trains still hurtling through the mines as though they were possessed!

The owner of the mines, Henry Ravenswood, was also the owner of the huge mansion sitting atop the hill which is now known as Phantom Manor. Some say you can still see Henry peering out of one of the top windows on Phantom Manor, checking that no-one is stealing his Gold from the mines below! 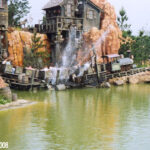 The theming around Big Thunder Mountain is quite spectacular & Disney has outdone itself here in the Disneyland Paris version. As soon as you enter via the main entrance you really feel as if you are on a mine with authentic steam engines, gold digging tools & mining offices all around. The queue area is littered with authentic items from the 1800’1 gold rush era. The mountain itself is designed to replicate the “rising bullet” formations in Arizona’s Monument Valley. Sound effects are piped in throughout the area including the ghosts of miners shouting “Fire in the Hole!” & the trundling wheels & whistle from a steam locomotive. As the railroad is situated on a mountain island you are circled by the riverboats of the Far West. With an extensive refurbishment from Nov 2015-Dec 2016 the whole area is repainted, refreshed and many new features added or re-introduced such as an extra explosion at the end of the last tunnel or the water jets as you dip down at the photo point area (pictured left).

Whilst hurtling around Big Thunder Mountain there is a point where the automatic on-ride photo is triggered. These make great souvenirs for visitors who have braved these possessed mine trains. Once you are heading to the highest point on the ride (a slow elevator pulls you up & you can see Phantom Manor to your left) you will then drop to a left turn and then a short up & over leads you into a dip where you almost go into the Rivers of the Far West.

It is just as you go into this dip where the flash from the Photo point will capture your moment aboard Big Thunder Mountain. You can purchase these photos in many forms such as on a key ring, in a Big Thunder Mountain photo frame or many more. The cost varies but is typically €5-15 each.

This ride has a fastpass system which can dramatically reduce your wait times. The fastpass ticket station is to the right of the main entrance & the fastpass entrance is further right. The queues for this ride can reach up to 2 hours in peak times whereas a fastpass could cut that time down to 0-15 minutes.

For the biggest & fastest thrill ask to be seated at the back in rows 12-16. For a much “slower feel” & gentler ride then sit nearer the front.

This is a safe rollercoaster for kids which DOES NOT go upside down or have any inversions.

If you have anyone who is sensitive to noise such as autistic etc then please bear in mind that inside the tunnels & during lift pulls the noise can be very loud.

Make sure you hats & glasses as well as bags are secure on boarding the train.

Only those who measure 102cm or above will be allowed to ride & they are very strict with this.