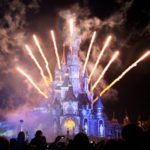 The Disney Illuminations night-time spectacular is famed as THE BEST closing ceremony of any Disney Park, anywhere in the world. The show itself lasts approximately 20 minutes & runs every night after the park closes. This is the main event of the DLP Shows & Parades.

It’s FREE to watch for all & features fireworks, state of the art illuminations on the castle itself & uses brilliant techniques incorporating the water fountains & musical effects to fully immerse you into a spectacular night time show which is second to none. CLICK HERE to read our Disney Illuminations full article. 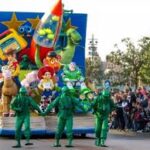 Disneyland Paris, as with all Disney parks throughout the world, has some breath-taking parades full of character interaction, music & amazing floats to admire. Parades are a regular feature in both Walt Disney Studios & the main Disneyland Park. The parades happen throughout the day with extra special parades at seasonal times such as Halloween & Christmas. Disney also put on a special celebration parade during their 30th anniversary celebrations which runs from March 2021 until Summer 2022. With the massive insvestments meaning we will see 3 brand new lands opened up in Walt Disney Studios, this is an exciting time for Disneyland Paris. In the next few years we will see Marvel Land, Star Wars land & of course Frozen Land coming to life!

You can see the times & locations of each parade by picking up a park map at the entrance to the parks each day so you can plan your days in advance.