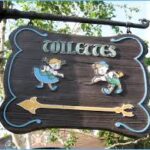 Even something as mundane as Toilets is given a little sprinkling of magic. Instead of having generic Male & Female signs, you will be met with a themed picture on your toilet entrance dependant on which area of the park you are in.

For example, when you are in the German themed “Pinocchio restaurant” and visit the toilets you will see a picture of either a boy or girl dressed in traditional German outfits to help you decide where to go !

There are many toilet facilities in all Disneyland areas and you are never far away from any of them wherever you are in Disneyland Paris.

There are 7 Toilet areas in Walt Disney Studios at Disneyland Paris. The picture above shows there location and if you are not too good at reading maps then they can be located here :

All facilities are well located and there are signs throughout the area directing you to your nearest Toilet area.

The main Disneyland Park has 16 toilet areas which are open to all visitors. Again, you are never far away and shouldn’t be caught too short ! If you can’t understand the map then below we have listed them by location :

Disneyland Paris toilets are well maintained throughout the day and generally very clean and tidy areas. Most of the toilets also include a Baby Changing area in both the Men & Women’s toilet areas & disabled access is provided. All Disney Hotels of course also have toilet facilities & if you have left the park then don’t be concerned as there are toilets also in the train station & also in Disney Village.