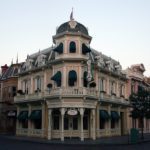 Welcome to the chosen restaurant of Walt Disney himself.

This iconic Disneyland Paris restaurant is one of the most sought after bookings in the parks.

Featuring six rooms all themed to represent an area on the parks you are sure to be immersed in the glorious Imagineering world brought to life.

The themed rooms are: