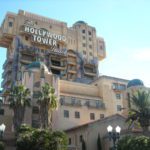 The Twilight Zone Tower of Terror is one of the most iconic rides in any Disney park & Paris is no exception. Towering above all other rides this is a daunting feature of the Walt Disney Studios park.

One of the best themed attractions in the whole park is littered with references to The Twilight Zone original TV series. The Disney Imagineers really went to town with the detail of the whole area giving it an eerily spooky & abandoned feel. There are cobwebs, dusty items of luggage and half eaten food in the lobby area.

The ride itself is dark drop ride which also features a haunting preshow and some special effects once on ride.

“One stormy night long ago, five people stepped through the door of an elevator and into a nightmare.

That door is opening once again, but this time it’s opening for you.”

The preshow is filled with ambience & a dreadful feeling that what you are about to endure will stay with you for the rest of your life……. however long that may be Mwah ha ha ha !

You are then taken onto the ride proper and seated inside a service elevator. The seats all have a seatbelt and small hand grip by each seat if you choose to literally “hold on to your seat“. It’s an option which many choose once that first drop hits. The elevator moves slowly backwards, sideways and forwards initially to place you into the ride lift shaft proper.

The lift shaft is used for the main drop scenes. Before the drop scenes we are treated to an eerily atmospheric special effects show on the first and second floors. It is here we see the 5 previous elevator guests who have never been seen since. Suddenly we are dropped and raised at huge speeds inside the lift shaft.

The drops are random for each lift so you never really know if you are going to drop suddenly or be held up high for a few seconds. At the top of the tower the lift doors open and we see a view of Disneyland Paris.  You don’t have time to enjoy the view as you plummet downwards at gravity defying speed which will literally lift you out of your seat.

At Disneyland Paris the Twilight Zone Tower of Terror stands a monstrous 183 feet tall. The tower also has a basement area of 40 feet which the lift also drops into, making this a truly terrifying experience for even the most adrenalin fuelled thrill seeker. Check-in …… if you dare!

The complete show lasts approximately 8 minutes with 5 minutes of preshow and a further 3 minutes on the actual ride itself.

There are 3 lift shafts with 6 lifts in each shaft. You can fit 22 people on each individual lift.

This ride has a fastpass queue which can drastically cut down wait times.

If you want the most intense experience then don’t hold on to the grip beside your seat. You could even raise your hands in the air. Go on, we dare you!

Although the minimum height requirement is only 102cm, please be aware that this is a VERY intense ride. You are the ultimate judge of whether your child will enjoy it.

There is so much theming to see it really is worth riding again and again to soak up the atmosphere. Of course, many never return a 2nd time!