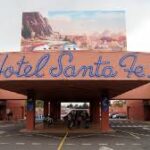 The theme of Disney’s Santa Fe Hotel is Disney’s Cars. It has expanded to include all features of the film from the iconic Route 66 to the barren Desert landscape. Hospitality is the key factor here as they celebrate the best of the American Southwest and also add in a touch of spice with some Mexican flavour. Ideal for youngsters and oldies alike no matter what budget you are on.

Disney’s Santa Fe Hotel has a Mexican & American Southwest themed restaurant which is open to guests and visitors. There is also a bar area serving delicious cocktails & drinks !

Disney’s Hotel Santa Fe rooms are all themed for the American South & Mexican with 2 Double beds.  There are no Suites at Disney’s Santa Fe Hotel in DLP but they do have larger 6-person Family Rooms.

All rooms have the following features as standard :

The walk to the parks is beautiful and will only take 10 to 15 minutes each way. Stunning views of the Rio Grande river & also of the Disney lake on the way and much better than taking the shuttle bus… unless it’s raining of course !

Just a short walk over the Rio Grande bridge where you can also use the surcharged amenities at Disney’s Cheyenne Hotel such as pony rides & restaurants.

It is advisable to always make reservations at the hotel restaurants in advance if possible.

Breakfast times can be hugely busy especially during peak season. You will be given a time slot for breakfast between 7am & 10am. Please note that the busiest times are between 8 & 9:30am.

The kids will be kept occupied with several trails where icons are telling a story linked to its location and history. For example the “Trail of Artefacts” is where you can find a cactus encased in a huge glass structure, a meteorite that has mysteriously crash landed into one the pueblo’s roof and even a flying saucer that seems to have crash landed just in front of the pueblos.

Have you been before ?